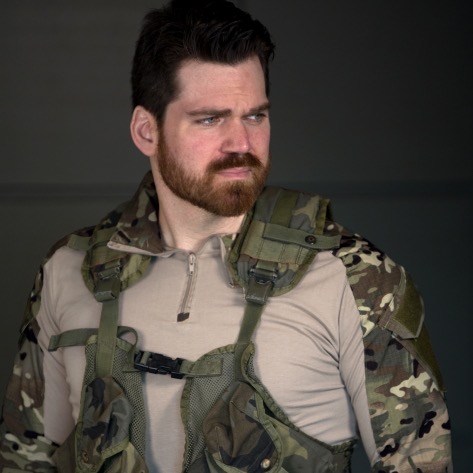 Tell about yourself and stunts, Michael!

I started as an actor but always had a physical background and an interest in acrobatics and martial arts.  I grew up in Arizona watching Jackie Chan movies at as young as 5 years old and decided I wanted to be an actor who does his own stunts.

For a kid living outside the industry with a normal happy family that had no idea how to pursue that, the stunts had to wait, and acting was the main focus, but I always had an interest in acrobatics and martial arts.  I moved to California to study acting at UC Irvine and one of my peers there hooked me up with an audition for the stunt team at Knott's Berry Farm.

By that time, I already had a background in tumbling and some martial arts, and my acting was strong enough so they hired me.  From there, hanging out with more stunt people helped improve all aspects of my stunt skills, as well as I started doing tons of small indie projects to get set experience, watch, study, and perform stunts for the camera and meet people.  I eventually moved on from Knott's and work for a pretty cool stunt company called Action Horizons [http://www.actionhorizons.com] which helped me work on Jordan Peele's US.

It's hard to say, because being a huge Jackie Chan fan, there's always been that interest.  But as I saw my career was gaining more stunt work than acting work, there's a strong sense of, "go where the work is and see where it takes you".

As much as I wanted to act, if stunts is where I was destined, that was fine with me as it's still involved with film and performing.

I like to think my greatest skill, and this is hard to put on a resume, is my temperament.  I'm always calm on set.  I like to think I listen and collaborate well.  I speak when necessary, but stay reserved and ready otherwise.

There will always be guys who flip harder and kick higher than me, but a solid set is really about teamwork and keeping your cool when all the other departments are losing their minds.

Despite our seriousness to our craft, we're all just huge nerds who love to laugh and stunts are just play time.  We may hide our childish nature on set for the sake of professionalism, but we go to work and get to play doing what everyone watching wishes they were doing.

We get to fight, jump off of stuff, drive too fast, fly through the air.  What's not to love? When you have a good team, there's nothing like judo flipping your buddy one moment, then laughing with them the next.

BE NICE TO EVERYONE!  Check your ego at the door.  Be patient.  Listen.  Stay focused.  Laser focused.  Be Ready, even 16 hours in to the day be ready.  Especially after lunch!  Don't be doing things on set you're not asked to do.  Don't be flipping on set or jumping off of stuff if it's not for a take!  You won't impress the coordinator.

Nothing worse for everybody if you get hurt or roll an ankle doing something non-work related that could've been prevented.  Know the chain of happiness: make your coordinator happy, who is trying to make the director happy, who is trying to make the producers happy who pay the bills.  Know your limits.  Say "no" to things you can't do, or even simply have a bad feeling about (though if you have a bad feeling, discuss with your coordinator and you may be able to fix the problem).

Most younger up and coming stunt people say "yes" to everything and it can get them hurt.  Protect yourself at all times and watch out for your teammates, especially when it's not your stunt.  This will greatly help with your reputation and reputation is everything.

Longevity is the name of the game.  Take care of your body.  Train as much as you can.  Always be learning new skills.  Stay limber.  I know it sounds silly, but eat healthy.  All of these are important for the longevity of your instrument.  I want my hips to work post 50.

It's always good to study some acting.  After all, we are simply the most physical form of acting.  There is a character to every stunt we do, and the character is what makes that stunt interesting for the audience.