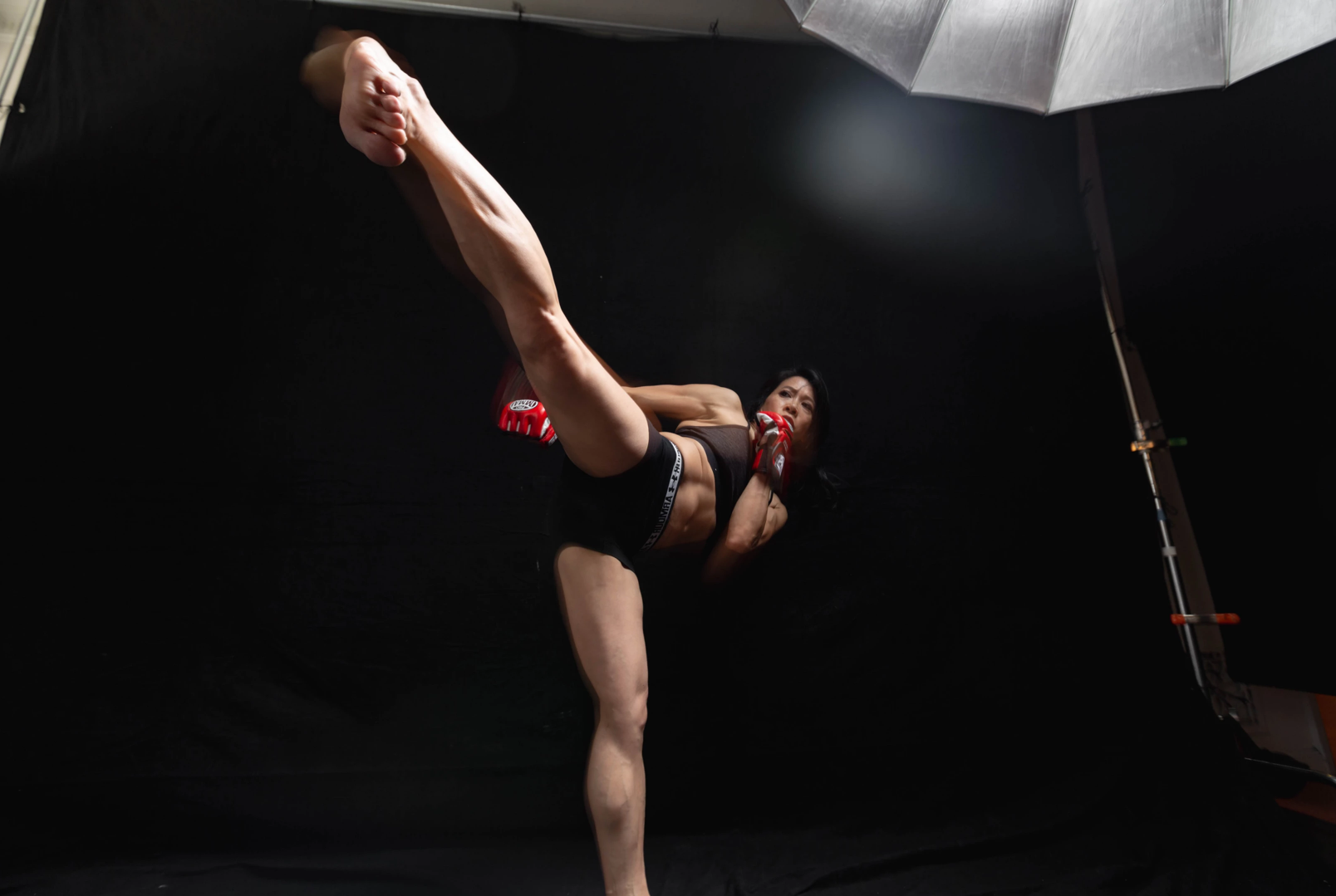 Tell about yourself and stunts, Marissa!

I was always an extremely active kid with an extremely active imagination.  I would climb trees and attack like a ninja, have epic Kung Fu battles with my older brother, save the world like my favorite superheroes, or put on dance shows for my family and perform for hours (yes! my parents are remarkable).

As a result, they decided (probably out of self-preservation) to do something with my “enthusiasm” and put me in ballet and karate.  The floodgates were opened and I was hooked.  I devoured anything physical and anything to do with performing.

Nicknamed “Mighty” by my peers, as a stuntwoman, actor, dancer, and now filmmaker, I am pretty fearless in my pursuit for creative adventure.

As a stuntwoman, I delved into multiple avenues of movement from martial arts (karate, Taekwondo, capoeira), tricking, parkour, to gymnastics.  I’ve had the remarkable opportunity to work on a diverse range of film and television shows such as “Shameless,” “NOS4A2,” “NCIS,” films such as “Birds of Prey, ““Colombiana,” “Pitch Perfect,” and “Logan,” a film that earned me a SAG and Taurus Award Nomination for “Best Overall Stunt By A Stuntwoman.”

As a dancer I studied several disciplines of dance, including ballet, contemporary, and breakdance. I toured nationally and internationally with seven Los Angeles dance companies earning me the Solo Award, an Ovation Award nomination, and the Lester Horton Award for “Outstanding Performer.”

I performed with artists such as Kanye West, Christina Aguillera, Tina Turner, worked with brands such as AT&T, Apple, Nike, and on films such as the award winning “LA LA LAND.”

As an actor, I just completed shooting “Chick Fight” starring Alec Baldwin and Malin Akerman, guest starred in Lifetime film “A Neighbor’s Deception,” kicked butt in Zoe Bell’s film “Raze,” and won Best Actress Award for my work in “When Kids Grow Up.”

Believing in the transformative power of storytelling, I created UP PRODUCTIONZ. U.P. an acronym for “undeniably powerful,” “unapologetically present,” “universal play,” is a company that produces content in both film and theater.  It strives to reinvest meaning and truth into storytelling by celebrating difference and individuality of the human experience, incorporating my love of acting, dance, and stunt-based action.

In all honesty, I didn’t know I was going to be a stunt performer, simply because I didn’t realize that it was a possibility.

I was introduced to the stunt community on the film “Act Of Valor.” I played a “terrorist” in this film and had to fire an AK-47 for the first time, take a couple of squib hits, take a head reaction and hit the ground.  I felt like I was home.

I desperately wanted to know more and I had the perfect team of incredible stunt performers (Shawn Robinson, Ernie Reyes Jr, Sonny Sison, Marco Morales, Dorian Kingi) on the film to encourage me and guide me through it.  Watching them work, seeing the variety and potential of stunts, and witnessing how vital it was to the story was inspiring.

Being a stunt performer is a dream come true.  I have the opportunity to utilize all the different facets of myself.  I can draw from and incorporate all the physical skills I worked so hard to acquire.  I have the opportunity to perform and contribute creatively to the story, while constantly learning and getting pushed to the extreme of what I thought I was capable of.

My greatest asset as a stunt performer is my versatility.  I’m driven by an insatiable appetite to master new movement languages, push my own boundaries, expand my physical and creative capabilities in hopes that it will introduce me to new possibilities and new forms of expression.  As a result, my background is eclectic.

From ballet, modern, jazz, hip hop, break dancing, to tricking, gymnastics, parkour, Taekwondo, karate, and capoeira there is a lot of experience and movement vocabulary that grounds me and readies me for whatever situation arises.

If I don’t know how to do something, I’m at least familiar with my learning process and the depths of my physicality and as a result, can trust my ability to learn the skill needed because I have done it countless times before.

On “Logan,” there was so much I was having to learn on the spot.  It was a remarkable but challenging experience.  X-23 (a dream character to play) was such a feral and dynamic mover that I had to pull from every movement language I had.  There were times that we would have only an hour to come up with a new take down or new series of attacks and sometimes we were combining some martial arts techniques with my dance partnering skills with a jujitsu take down and gnarly wrecks.

I had to be really good at picking things up very quickly and performing it with full intention.  If I didn’t have the background I had, the learning curve would have been much more intense and would have taken a lot longer.

You mean besides having the opportunity to live out my dreams of being a superhero?... At the risk of sounding cheesy and sentimental, the best part of being a stunt performer is being part of the stunt community.

It is a community of brothers and sisters (not just colleagues) who are there to support each other, take care of each other, keep each other safe, and collaborate to serve the story the best way we know how.  It is a diverse bunch with backgrounds stemming from military to gymnasts, world renowned martial artists to dancers that I have had the privilege to learn from every day.

We as a community respect each other as individuals (our individual skills and backgrounds) but then work hard to make sure everyone is at their fullest potential to serve the vision of the story while keeping the whole team safe.  I’ve learned so much and have improved as a performer, an athlete, and as a person.

I’ve never met a community that is truly collaborative and supportive like the stunt community.

Train as much as you can on all different kinds of disciplines.  You never know what you will need to know how to do, but at least if you are versatile the learning curve won’t be as drastic.

Meet people in the stunt community, pay attention, and learn.  And remember that this work is not just about you.  You train and improve to keep yourself and those around you safe.

Stunt work is collaborative, it is a community and we need to support each other to keep us all safe and thriving.