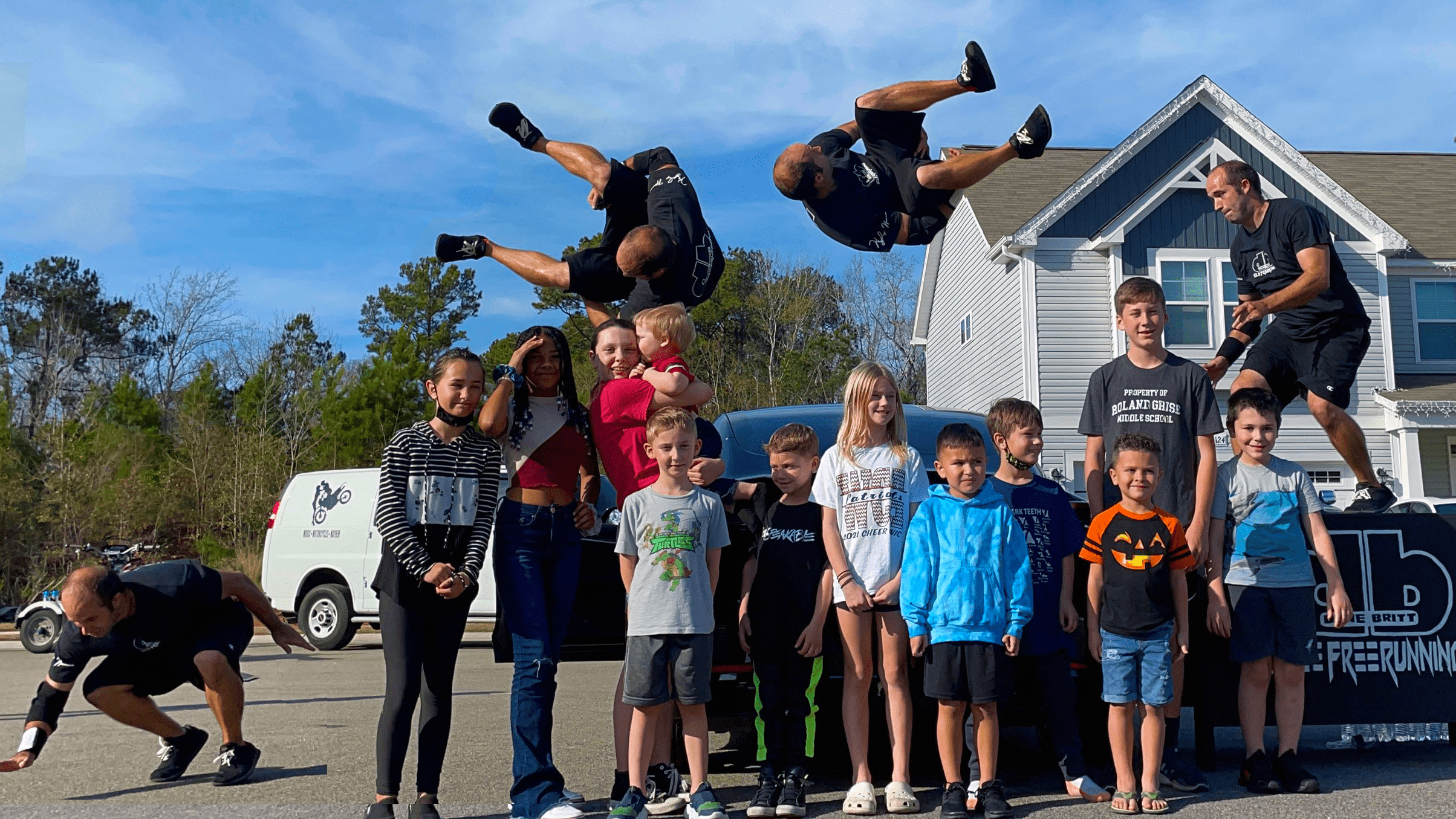 I grew up youngest of 3 brothers, making me the test dummy for any and all bad ideas. This gave me a love for doing stunts, but I didn't take up any sports or disciplines till I graduated high school.  With the growth of parkour videos on YouTube, I started my journey, learning and developing skills, from watching videos and later getting certified to  coach and teach in it.  After 10 years or so, I started landing a few jobs doing stunts for local commercials and a couple of music videos.  With a few of my former students and a world class motorcyclist, we began to do live performances.  A very much unique live experience blending motorcycle stunts with the acrobatics and various movements.  We perform live shows for schools and other youth organization to provide a positive message for movement and following dreams!

My love for stunts just came from playing as a child, and never wanting to stop playing.

My greatest skill as a live performer is either my ability to adapt or communicate (without the crowd noticing). Adapting a show to what's available or what the other performers can keep up with.  Knowing how to give cues or signals that can relay messages to other performers without giving away any clues to a change in the show. For adapting, we have stunts that often involve me flipping over something, large. Often switch between vehicles, bikes, or even just a large amount of people, and having a limited set up, I have to create a way to perform it. Communicating, one of our popular stunts involves me flipping over our motorcyclist while he is driving at me. So we set up cues to know if I'm up to it at that moment or if we need to off set, or slow down, and its all based on small movements or like tapping of a foot before beginning the approach.

Being a stunt performer allows me to continue just playing. Doing all the movements, jumps, and flips I love to do. And it allows me to inspire or show off, while just playing, it's an outlet to share what I love!

One of my first sets, I drove like 3 hours out to, practiced and drilled my stunts for like 4 or 5 hours out in the freezing cold, waiting for the first take to happen. They finally tell us that we are about to start filming and that they had figured out all the angles and shots for the scene.  One of the other performers asks for a spot on a very simple move over a fence.  A small mistake happens, not even his, but one of the strings in his hoodie caught the fence, and like stops his whole move and spins him horribly.  I managed to catch him and put him to his feet, but at some point I caught an elbow and had to immediate get sent to get 7 stitches in my mouth.  After all that I make it back to set, like 2 hours later and they still haven't filmed so I wound up being a hooded extra, always with my back to the camera since my face was bloodied and swollen. Super fun time, just sucky ending.

As a live performer, just be sure your doing what you do because you love it.  It's immediately seen if your doing something because you have to not because you want to. May even be the same for film, coordinators can see your hard work and hours put in, but they can also see your love for what you do. Do it for you.