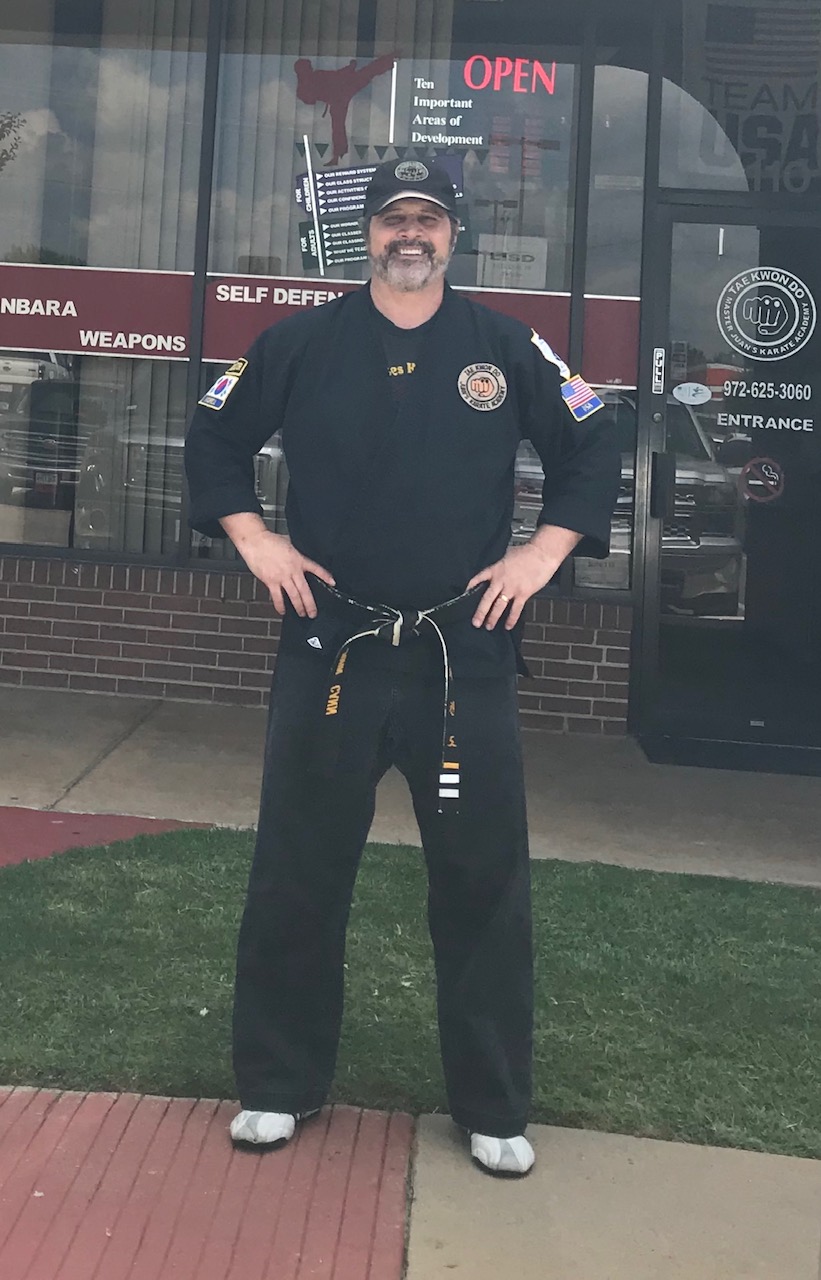 When I was 5 years old I saw an old west show at a place in Kentucky called Kentuck Territory.  I watched a bandit get shot and fall off the 2nd story balcony of the saloon and afterwards get up and dust himself off and do it again 2 hours later.  My father took me to meet the actor who did the fall so he could show me how he did it.  He showed me the pads he was wearing and the area where he fell which had a pad covered in burlap and dirt and it was then I realized it was all an illusion.  I was hooked.  I was later inspired by Dar Robinson and Hal Needham with shows like That's Incredible, Smokey and The Bandit and Hooper.

High falls have always been my passion.  The art of falling has always presented unique challenges to stunt performers.  Most people just perform a fall and hope they land on their mark.  I apply my acting training to falls in order to help tell the story.  A person reacts differently if he "falls" off a building as opposed to when he "jumps" off a building vs. being "blown" out a window by a claymore mine.  I always ask, "Why is this person falling? What happened that made him airborne?  Is he dead or alive?"  My one and only time doubling for Mr. Norris on Walker Texas Ranger was because Walker was going to be falling off a building in a dream sequence. Eric Norris told me that his father had requested me to do the fall, because I had done several falls on the show and he never saw me do the same fall twice.  The scene was Walker being shot with automatic weapons and falling off a building dead.  The challenge was, how do you produce a lot of action from a dead body falling?  So I had Kinnie, who was doing the squib hits, wave his arms wildly as he was being shot.  This gave me the motion needed prior to the fall to justify my body flipping and twisting as I fell off the building.  I also requested wardrobe put Chuck in a jacket in order to create even more movement as I fell.  The shot turned out great and chuck loved it.  I also do highfalls because when I was 5 I had a dream that I could fly and one of these days I'm going to make that dream come true! I simply need more air time!

For me the best part of being a stunt performer is the people you get to meet and work with along the way.  Not just stunt people, who are some of the most amazing humans on the planet,  but the actors, the crew, the directors, DP's, grips and all the other critical people who turn words on a page into action on film .  Everyone working toward a common goal and having the opportunity to let their creativity be realized in such a tangible and rewarding way. On a good production they become family and many of the people I have worked with over the years have blessed me in ways they don't even know.  And finally, hearing the reactions from an audience when they see you die or almost die is priceless.

When I was working on a movie called "A Haunting at the Beacon"  we were shooting in The Rogers Hotel in Waxahachie, TX.  Most of the crew were staying in the hotel while we were shooting there.  So we were shooting a ghost story in a notoriously haunted hotel.  On the first day of shooting one of the grips checked into his room and finding the toilet paper roll on the floor in the bathroom he picked it up and put it back on the holder and went to work.  8 hours later he came back to his room only to find the toilet paper roll in exactly the same spot on the floor.  So, he put it back on the holder, turned around to get his dopp kit and when he turned back, the roll was in the exact same spot in the middle of the floor!  He left the hotel never to return!  Many bizarre occurrences happened during the run of the show and near the end of the shoot I was preparing to do a 5 story highfall out the window of one of the rooms.  Everything was set.  The airbag was ready, the spotters were set, the entire town of Waxahachie had gathered on the sidewalks to see this idiot jump through a window.  We rolled cameras and "Action!!!"  I threw myself against the tempered glass window and bounced off.  The crowd saw the window bulge a little and then the shouts of "Abort!"  "Abort!" from the 1st AD and DP.  I looked at the effects coordinator, Frank, and asked, "What happened?" he said, "I don't know."  So I said, "OK, you need to figure it out.  I'm going to go out in the hallway and get my heart rate back to normal and we can try again."  So I went out of the room and sat down in the hall to gather my thoughts.  As I was sitting there I decided we might need some help so I got on the radio and asked all my spotters to drop what they were doing and come lay hands on the building and pray.  So all the spectators on the street saw the guys around my airbag drop what they were doing, walk over to the building and put a hand on it and bow their heads.  They said a quick prayer and then went back to work.  Meanwhile I had returned to my platform to get ready to try again.  As I looked at the window I realized that the horizontal blinds that were supposed to break away and  go out the window with me had been re-set.  I asked who had re-set the blinds and the answer was, no one.  "You mean they didn't fall down earlier when I threw my full body weight against them?" "Nope."  So I radioed down to get someone from the art dept. to come up and cut the lines on the blinds and put them up with some scotch tape so that they would fall if I breathed on them, and then I asked Frank, "So did you figure it out?"  and He said, "Yes." So I asked, "What was the problem?"  and he said, "I don't know."  "I thought you said you figured it out!"   And he replied, "I checked everything, the wires, the charges, the button.  they're all good.  I don't know why it didn't go off."  I said, "OK but if I bounce off the glass again I'm kicking your ass!"  Take two went perfectly and all I got was a little scratch on my nose from a piece of glass.  Later, on my way home, I got a call from one of my spotters, Mark DeAllesandro, and he said, "John, I don't think there was anything evil happening in that room today."  I said, "What do you mean?" and he said, "I think your angels were working overtime!  One was holding the window in on the first take, one was disconnecting the effects and the other one was whispering into your ear, 'Look at the blinds!' If you had gone through that window on the first take those blinds might have hung you up and we'd be making funeral arrangements right now!"  A few days later one of my friends, who was there taking pictures from the sidewalk, called and said that he had some pictures of the fall and would I like to have them.  I said, "Of course."  Then he said something that sent a chill down my spine.  He asked, "By the way, who was that guy in the cowboy hat who was watching you go out the window?  Didn't he blow the shot?"  I said, "What are you talking about?" and he said that there is a guy in dark glasses and a cowboy had watching me fall in one of the pictures.  There was no one near me when I went out the window. It turns out that the room we were in was the most paranormally active room in the Rogers Hotel and it is believed to be haunted by a cowboy who shot himself in that room.

Be respectful to everyone you meet.  You never know who you may be talking to or which grip will be the producer on your next show.  Be truthful and never exaggerate your abilities.  Keep things in perspective and remember that there is not a movie in the world worth breaking a fingernail over much less dying for.  Stunt work is not so much a daredevil act as it is a magic show.  And finally, DON'T BE STUPID, educate yourself about the history of this business and those who came before you and show proper respect to the old timers who made this industry.  If you are setting up a stunt and you see an old stuntman or stuntwoman shaking their head, go ask him or her why they are shaking their head.  They didn't get to be old because they're stupid.

Action P.A.C. Stunts is a full service stunt company providing stunt performance, coordination and equipment services to the entire entertainment industry.  I am currently offering stunt training courses of all kinds in McKinney Texas.  If you would like to arrange for me to come to you for specialty training please contact me through my website. I am also a partner with Movie Institute and Film forge.  If you need corporate video produced at a reasonable price or have viable film projects that you need help producing please contact me.