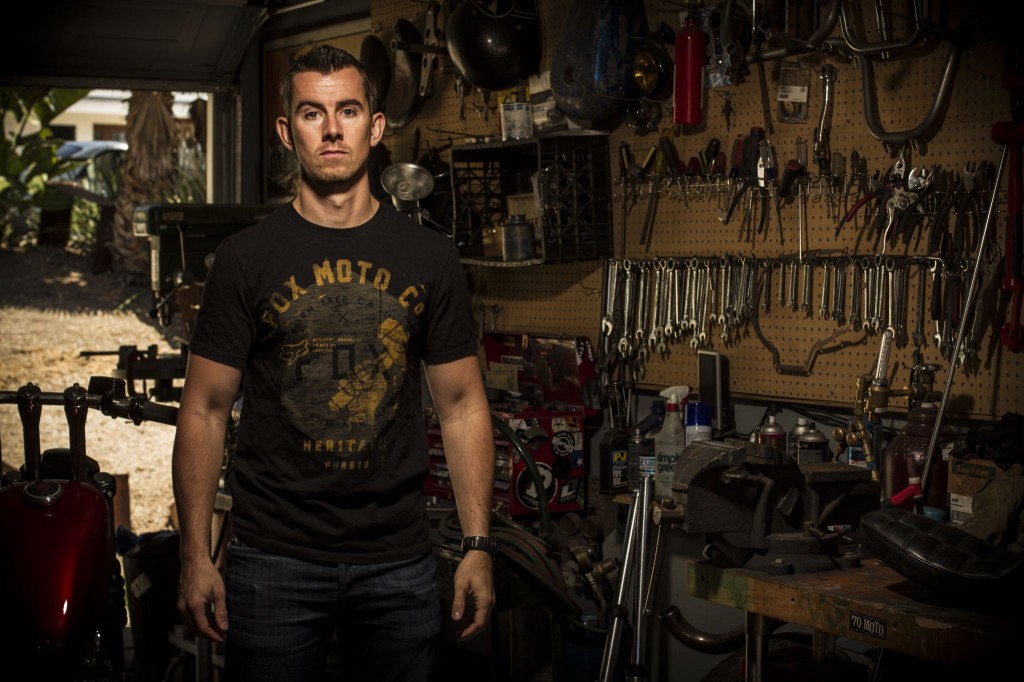 Tell about yourself and story, Chris!

I was born and raised in the mountains in Colorado—riding motorcycles, snowboarding, shooting, and spending nearly every waking moment outdoors.  At the age of 15 I began competing professionally in freestyle motocross.  By working my butt off and graduating high school early, I was able to tour full time and gain a ton of life experience in the process.

I competed professionally for several years—at one point landing a top-15 ranking in the International Freestyle Motocross Association contest circuit—before heading off to College and transitioning into multiple other forms of off-road racing (GNCC, EnduroCross, and extreme enduro), along with a job as a motorcycle magazine editor.  In my off-time, I was usually freediving, swimming, and SCUBA diving.

Right around 2009, I was super fortunate to cross paths with Gary Hymes, who became a good friend and ended up mentoring me into the business. I got my SAG card in 2010 and have been having a blast ever since.

For me personally, I was drawn to a career in stunts because it allowed me to put more of my skills to use than any other job I'd ever encountered.  Like many stunt performers, I've always been "hobby heavy"—my garage is packed with motorcycles, surf boards, bicycles, boxing gear, SCUBA tanks, and video editing equipment.

All of these things didn't mean squat when I worked in a cubicle, but in the film industry they have amounted to valuable tools for my toolbox.

I believe my greatest asset as a stuntman is my ability to make super-fast micro decisions while under significant pressure.  I 100% attribute this to experience I've gained racing motocross and doing FMX as a kid.

From a very young age, I learned—sometimes the hard way—how to mentally calculate things like speed, acceleration time, traction, proximity to both static and moving objects, braking distance, and overall timing.  I can do a single flyby past a ramp and feel in my gut exactly how fast I should hit it, and I know how to adjust my body mid-high-speed crash in order to keep myself from getting totally broke off.

My brain can somehow make rapid adjustments in realtime, both when everything is going perfectly as well as when it's all going pear-shaped.  As a result, I've become ultra comfortable in the proverbial "flow state" where we are operating more on feel and instinct than on cognitive horsepower.  I feel like this skill comes in handy on every stunt job, no matter what the specific gag is that I'm doing.

For me, the best thing about stunts is the variety.  My longest run on one show was over 300 days, and even then every day had that "first day of school" feeling in that the obstacles I was going to encounter were more or less a question mark, and there were very few guarantees.

Even on a job that long, your right to be there effectively resets at wrap, and even if you've been knocking it out of the park performance-wise you still have to earn it the next morning like it's your first day on that production.  I love that part of the job; I feel that it keeps us sharp and promotes an environment of constant learning, flexibility, and adaptation.

Man, I have had so many unbelievable experiences on set, it's tough to nail down a favorite one.  I suppose the first funny story that comes to mind occurred while I was doubling James Franco on this wild post-apocalyptic cannibal biker gang film.

Toward the end of production, I had to high-side this pieced-together Harley rat bike that had been so thrashed over the past month, it was literally held together in multiple places by safety wire.  We were shooting out in the desert and it was a million degrees, yet I was wearing full black leathers.

The morning of the crash, I called my wife—who at the time was like 8.9999 months pregnant with our first kid—and she basically said, "I just left the doctor and I'm four centimeters dilated.  Don't stress, but baby could be here at any time."  Of course, we had no cell service at the location, so I was sweating like a pig even before I set foot in the makeup trailer that day.

Fast forward to the stunt and I was so wrapped around the axle with nerves, I essentially told the boys, "Screw it, I'm going to send this crash so stinking hard the first time that the bike will never, ever be able to do a second take."  In my thick-skulled head, this was the perfect plan.

Well, action was called and I got up to speed, threw the bike sideways and high-sided so dang hard that I got spit completely out of frame. I'm lying on the ground, in tons of pain yet cracking up as James Franco apologetically walks up and asks if I could do it again because the cameras didn't catch it.

I ended up doing it a couple more times before wrapping out and hauling butt home with time to spare before the baby was born.  Thankfully, I've not since been so nervous to do a simple stunt!

My number one piece of advice for up-and-coming stunt performers is simple: DO NOT TRY TO BE ALL THINGS TO ALL PEOPLE!  The common saying in our community goes something like, "Everyone has their thing that they're a 'ten' in.  Try to be an 'eight' or a 'nine' in as many other areas as possible."

I fully believe in this statement and have tried to adopt it in my own career.  Sadly, though, this truism has been convoluted by many young stunt performers who think, "You must be a 'ten' in everything".  The result of this is—at its most innocent—an overestimation of one's own abilities, or—at worst—full-on lying about skills.

I blame social media for this, because a lot of hungry stunt performers see the drift guys crushing the drift game, the fight guys slaying the fight game, and the parkour guys killing the parkour game, and they come to the conclusion that they have to be a rockstar in every single category.  Not only is that unreasonable, it can be pretty dangerous.

I'll give you a personal example: I do not like horses.  They do not like me.  If you called me for a horse job tomorrow, I would politely give you a short list of great dudes you should be calling, guys who have been riding horses as long as I've been riding motorcycles.

But we all know that when a western comes to town, these same horse pros—cowboys and cowgirls who grew up on and around animals—start getting tons of calls from eager stunt performers hoping for some "quick tips" that could help them win over the coordinator and bag a spot on the film.

Heck, some of them might actually pull it off at first and land the job, until they're in a spot on set where things are going wrong and they get themselves—and possibly others—embarrassed, fired, injured, or worse.  Ultimately, I'd love for others to realize that it's OK to not be amazing at everything, it's perfectly fine to turn down jobs that you're not suited for, and it's absolutely essential to be honest about your skills.

I could spend the rest of my career helping out younger stunt performers, and I would still be in a massive hole of virtual debt compared to all the help I've received from my peers.  I will never, ever be able to pay back the advice, mentorship, opportunities, and lessons provided to me.

With that in mind, I'd just like to say a really big thank you to everyone who has positively contributed to my stunt career throughout the past decade.  There have been countless guys and gals who have given me pointers, loaned me a piece of gear, sat me down at wrap, helped me out, chewed me out, patched me up, put my name in, and kept me safe.  I am extremely thankful to you all.