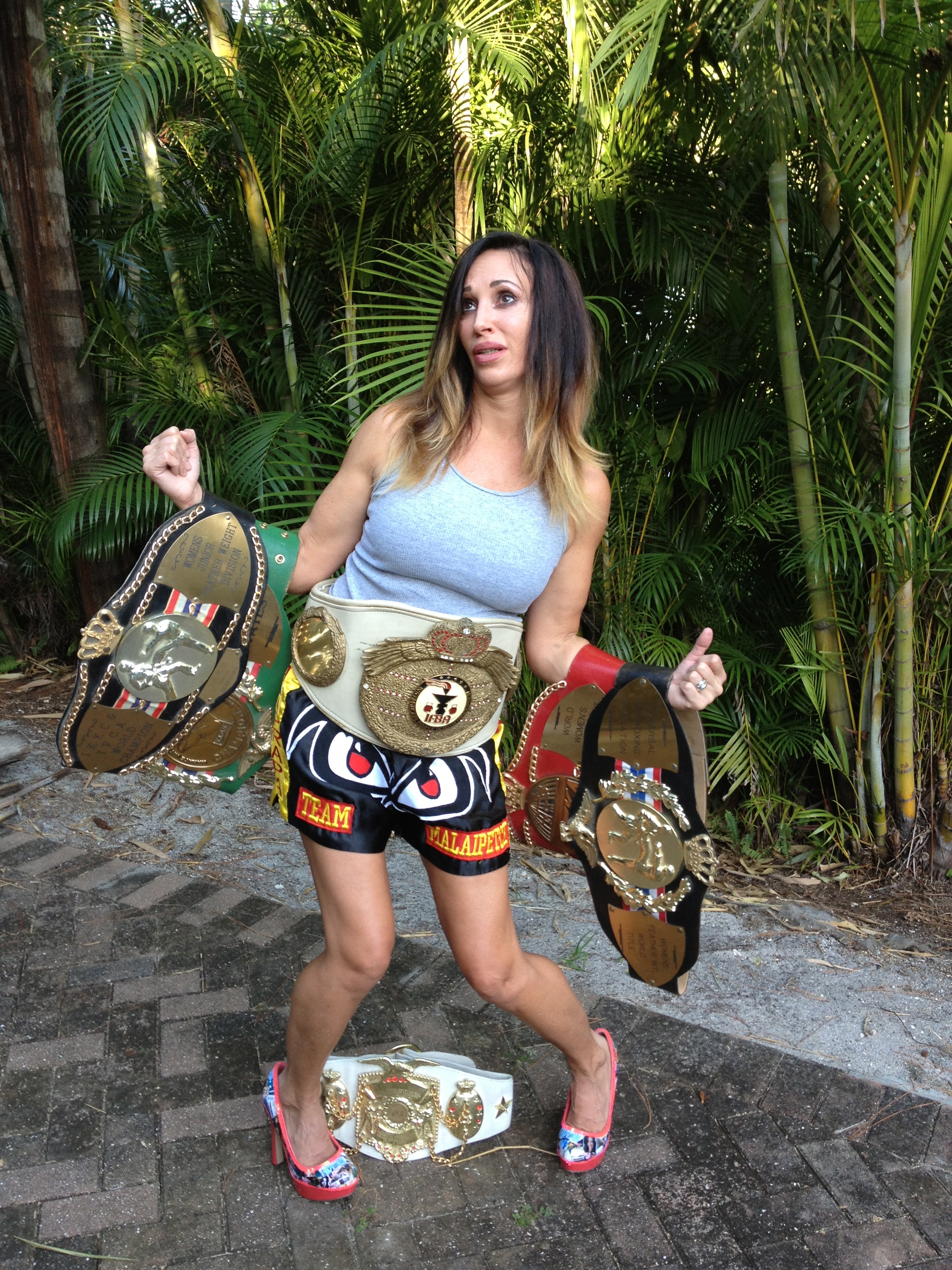 I am ORIGINALLY from St.Louis, MISSOURI. I grew up doing GYMNASTICS.  And I was decent, but I wasn’t great. And I wanted to be GREAT. So, I jumped into KARATE, because my brother was doing it, and that became my life. We got our BLACKBELTS & competed in a gazillion KARATE TOURNAMENTS and then it just wasn’t enough. I needed MORE, and I kept getting DISQUALIFIED for hitting too hard. ALL the guys were KICKBOXING and I said, HEY, what about me?  But back then, there weren’t enough girls fighting in the amateurs. My karate instructor said, Bridgett, if you REALLY wana do this, you gotta go PRO, right off the bat.I’m like, LET’S DO IT ! PUT ME IN THAT RING !For my PRO DEBUT, I fought the UNITED STATES CHAMPION, “SWEET” Denise Taylor. I WON and that was NOT supposed to happen. I learned early on to NEVER underestimate your opponent. After winning the US TITLE, I took a WORLD TITLE fight that I just didn't have enough experience for. But when you’re a fighter, you wana fight…so I took it. I got beat, & that loss shattered me, but that LOSS became the BEST thing that ever happened to me. I HEADED TO LOS ANGELES. I surrounded myself with THE BEST FIGHT TEAM in the business. We went on to collect (5) KICKBOXING WORLD TITLES and the IFBA BOXING WORLD TITLE. By then, my BOXING career really took off. I fought for Sugar Ray Leonard, Oscar DeLahoya, & then signed with DON KING & fought on the EVANDER HOLYFIELD vs. LENNOX LEWIS undercard at MADISON SQUARE GARDEN. I was making HISTORY in WOMEN’S BOXING, while filming movies and TV shows.

a CASTING DIRECTOR saw me training & approached me. He told me I’d be perfect for this NEW TV SERIES. I told him, I’m NOT an ACTOR. I’m a FIGHTER. But he talked me into it. This would be my very 1st ACTING AUDITON in LOS ANGELES. I BOOKED it. It was the MIGHTY MOPHIN POWER RANGERS. Acting was fun, but once I saw the stunt team rehearsing, I KNEW...I wanted IN. They saw I could do my own stunts, so my talented friend, Eric Betts, convinced the stunt coordinator, Isaac Florentine, to give me a shot. And that was how I became a STUNT WOMAN. I felt at home prioritizing ACTION on film, and haven't looked back since. It is a privilege to have a seat at the table among the limitless talented people within the stunt community.

Fighting. There are ENDLESS stunts behind it, which makes me happy happy.

the HIGH of NAILING the stunt....there is NO drug on Earth like it.

on the film, THE GLIMMER MAN, with Steven Seagal, upon walking to set, I had learned that the actor had sent a few stuntmen to the hospital, and I would be fighting him next. This was early on in my career and I was wicked nervous while being in the company of several highly respected stunt performers. Seagal is 6'4" and he wanted me to side kick him in the head. I am the tin man, yet somehow managed to maneuver my foot UP there. He held my foot and said, "Hmmmmm, what shall I do with this?" He launched me all the way across the room with NO notice whatsoever. Thank God my stunt buddy caught me and saved my head from smacking the hard ground. I was SO embarrassed yet, I got back up, put my big girl pants on and worked real hard. It turned out to be a cool fight that got cut.

I say this to you as I say this to me. WE are as good as the people who surround us.If we say YES to the gig, we better DELIVER, & NOT write a check our derrière's cannot cash. Preparation is everything. WE need to have each other's SiX at all times, all the way around. If we have a question, when the stakes are high, and time is of the essence....ASK. Especially when there's an over population of chefs in the kitchen. I got run over by a motorcycle one time where I received THREE distinctly DIFFERENT sets of directions. I picked one to go with and it was incorrect. My bad. I was OK, but I messed up the take. Live and learn. Check and RE-check any and ALL equipment. The night before a gag, I go over and over it again and again in my mind. VISUALIZE. The one thing that is certain to reoccur is change. Get used to it. DO not get married to the choreography. And, remember to be a TEAM player, NOT a prima donna. It's NOT about us, it's about taking care of our actor. And savor the moment, we are not splitting the atom. We are making entertainment.

a LOT has happened in between fighting and stunts. Cancer happened and that was like taking a bullet. Saying goodbye to my fight career was hard, but getting cancer in 2019 really plopped my rear end on the asphalt where the rubber meets the road. By the GRACE of GOD and my amazing team of doctors, I have been CLEARED. The day after I rang the bell, my mom was diagnosed with stage 4 lung cancer. That was harder than ANYTHING I went through. The time we spent together has been remarkable. My mom, my GiRL, went to Heaven on July 20, 2020. Today, I stop and smell the roses. I also have learned to STOP sweating the PETTY things in life. I am trying at least. I am training and taking every day as a gift from GOD. I have also learned that when I take the attention OFF myself and do something kind for another soul...that THIS is what feeds my soul. I want to specifically THANK my stunt friends who have prayed for me and have encouraged me. YOUR love and support mean SO much to me. God bless each and every one of you and your families. http://youtu.be/Chwt2SpCXW0